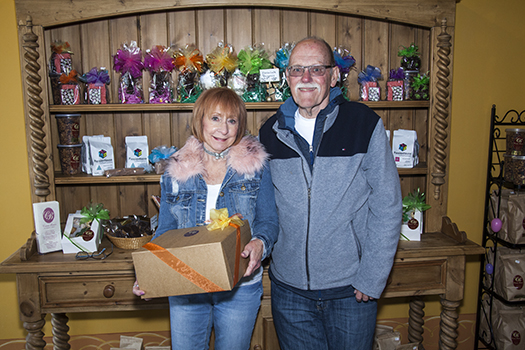 Karen and Roman Stelmachowski are two of our regulars who could easily win the cutest couple award!  They have been traveling all the way from Naperville two to three times a week for the past year and have truly become Cocoa Bean regulars!  Their daughter, who works in Geneva as a stylist, first turned them on to Cocoa Bean after they started regularly visiting her and touring the charming downtown.

They are such avid fans of the many delicious treats that early this Spring, when Karen was sick, Roman drove her to Cocoa Bean and they ate in the car outside so as not to spread germs.  They wanted to get out of the house and get Karen the mushroom barley soup to soothe her flu.  Bad weather has not been a deterrent for Roman who will drive there for their weekly fix– no matter the conditions.

“We love seeing Roman and Karen weekly – they are the sweetest couple!” said Inga, a baker at Cocoa Bean.

Their absolute favorite items to get routinely are the croissants; Roman’s personal recommendation is the almond.  When they had their very first croissants at Cocoa Bean they were immediately taken back to their trip to Paris, and are now addicted to them.  Karen has high-praise for the morning buns, as well.

The next thing they want to try is the beautiful cakes they constantly see going out the door – with a bunch of grandkids they are looking forward to surprising them with a special cake on their next birthday!